First of all it is important to understand how exactly are the impressions tracked. Impressions are tracked only for those banners which include the impression tracker tag which basically is a simple html <img> tag with src set to /scripts/imp.php file of your Post Affiliate Pro installation.

Unfortunately it might not be as easy as that since from version 5.4.24.3 there is an option to hash the tracking script names so it doesn't have to necessarily be imp.php but it can be a bunch of random letters and numbers instead like for example /scripts/zhki57n4awm. However if you see 'i' letter in this bunch of letters and numbers then you can be sure that it is the impression tracker.

First step is to check the source code of the website on which you have the banner placed and see whether in your banner code you have a similar <img> tag like this one:

If you do then you can proceed to second step.

Second step is to have the page with the banner opened with developer tools/Firebug enabled (usually by pressing F12) and "Network" tab in the dev tools selected. If you don't see any traffic there, so the dev tools were not enabled when the page was opened then you can reload the page with banner using ctrl+f5 keyboard shortcut. Now in the Network tab you should see a request to the <img> tag URL so to something like:

as depicted on this screenshot: 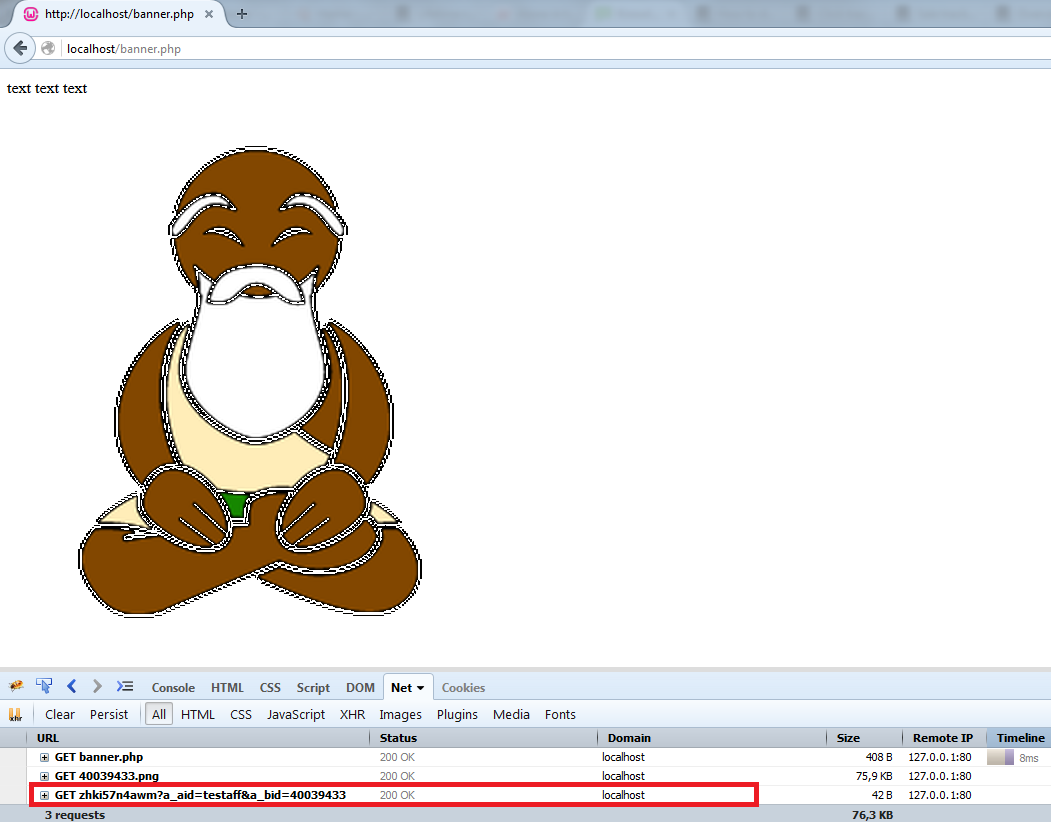 As you can see the request to the impression script was executed correctly with status 200 OK so you can be sure that Post Affiliate Pro was notified about it. If you still don't see the impression tracked in for example the stats for the banner even after 15 minutes then most probably there is something wrong on the settings part so continue to step 3.

Third step comprises of various settings checks inside the application so log in to your merchant panel and go over the following steps:

go to Configuration->URL parameter names and confirm that Affiliate ID and Banner ID are set to the parameters you see called after the imp.php (zhki57n4awm) so in my example to a_aid and to a_bid.

go to Affiliates->Affiliates manager and search for the ID you find after the Affiliate ID parameter and make sure that the affiliate has status Approved.

go to Banners->Banners manager and search for the ID you find after the Banner ID parameter and edit this banner. Remember the campaign name for which this banner is set up.

go to Campaigns->Campaigns manager and search for the campaign with given name, edit it and look at "Campaign status" whether the campaign is Active. If it is then look whether you can see "Campaign type" section there on edit campaign page. If you have this section and there you have either Public - with manual approval or Private - Visible only for invited affiliates selected then go to Affiliates in campaign tab at the top of the campaign edit screen and have a look whether the affiliate is added in this campaign and whether he is approved in there.

Fourth step is about repeating the previous steps and if you still aren't able to make it work even after re-checking the previous steps then contact us via email at support@qualityunit.com and send us the URL where the banner is placed and login credentials for your merchant/network owner panel, so the URL address, the username and the password. We might also need FTP access to figure out what is wrong so you can send that along as well.